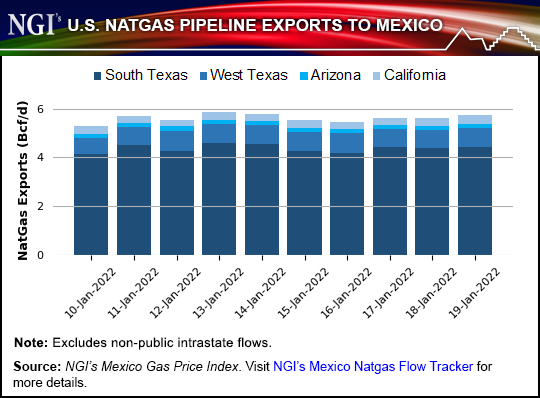 CFEi next week will launch a two-phase tender for the construction and operation of a natural gas pipeline to supply gas sourced from the United States to existing and planned combined-cycle gas-fired power plants in Baja California state, said Serdán.

CFE will require 280 MMcf/d of capacity to be available by the first half of 2024 and 490 MMcf/d by January of 2028, Serdán said. CFE would be the anchor shipper under a levelized rate for a period of 25 years.

Additionally, CFEnergía will be launching a tender in the coming days for engineering, procurement and construction of a section of the Guaymas-El Oro natural gas pipeline that has been out of commission since 2017 due to conflict with a local faction of the Yaqui Indigenous tribe.

The completion and restart of Guaymas-El Oro will allow gas sourced from West Texas to reach demand in the areas around Topolobampo and Mazatlán, said de la Torre.

CFE also will be launching a tender soon for construction of a 500 MMcf/d pipeline spanning the Tehuantepec Isthmus, from Coatzacoalcos to Salina Cruz. CFE sought formal expressions of interest in the project year.

The pipeline is meant to supply gas to a liquefied natural gas (LNG) export terminal planned by CFE in Salina Cruz, as well as future industrial plants in the isthmus region.

CFE is seeking a private sector partner to develop and operate the terminal, de la Torre said. The project could “represent an important creation of value for CFE and for private firms,” he said.

De la Torre highlighted that of the seven pipeline projects that were stalled in Mexico as of 2018, four have since entered operation: Sur de Texas-Tuxpan, Samalayuca-Sásabe, La Laguna-Aguascalientes and Villa de Reyes-Aguascalientes-Guadalajara.

North of the border, meanwhile, CFEi will soon be making capacity available to third parties on its Waha and Nueces header systems, said Serdán.

Via the two subsidiaries, CFE has anchored  the buildout of an extensive pipeline network to import gas from the United States amid stagnant domestic production in Mexico.

De la Torre also highlighted a planned extension of the offshore Sur de Texas-Tuxpan to the Yucatán Peninsula. CFE and TC are in talks to jointly develop the project.

Americas: ‘Smart’ use of rapid tests critical amid COVID surge |