DOLPHINS are one of the most intelligent animals on Earth, with many studies suggesting that they are second only to humans on the brain front.

However, they are also known to be incredibly violent, especially in captivity, and have been known to maul, maim, and even kill humans.

Although fatal dolphin attacks on humans are rare these sea mammals can be far more aggressive than they seem.

Just yesterday, a dolphin attacked its trainer at Miami Seaquarium during a live performance in front of horrified spectators.

Sundance, a 23-year-old dolphin who has spent his entire life in captivity, lunged at the female trainer, attempting to drown her as two other performers raced to help.

In footage posted on TikTok, the dolphin lunges several times at the woman, before she is able to pull herself out of the water. 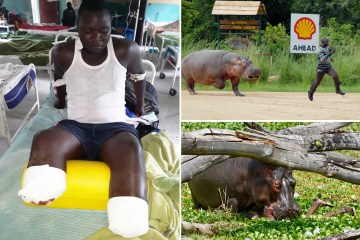 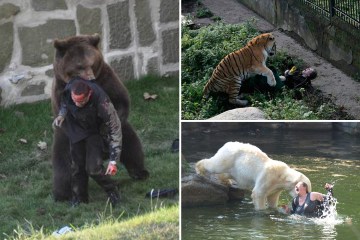 Photographer Shannon Carpenter, who took the footage, told WPLG Local 10: “You could tell she was in some type of pain.

“The kids were cheering and thinking this was neat. You could tell the adults knew something was wrong.”

She was reportedly rushed to hospital in an ambulance following the shocking incident.

This is far from a lone event, with the Center for Surf Research in California claiming that the number of dolphin attacks per year increasing in the past decade.

Over the years, there have been several violent and bizarre incidents involving dolphins and humans which might make you think twice before getting in the water with them.

In 1994, a male dolphin Tiao which was known to be friendly towards women swimmers attacked two men in the sea off Sao Paulo, Brazi, after apparently seeing them as romantic competitors.

One of them men tragically died from internal haemorrhaging after being butted repeatedly by the dolphin, while the other suffered a broken rib.

According to reports, he had already hospitalised 28 swimmers before killing Joao Paulo Moreira.

Unconfirmed reports claimed Moreira was drunk and trying to restrain Tiao, and may even have been trying to force a cigarette into his blowhole.

This is the only reported case of a human fatality involving a wild dolphin.

In 2019, Brit girl Lexi Yeo was savaged by two dolphins that dragged her under the water in a shocking incident at a centre in Cancun, Mexico.

The 10-year-old from east London who was visiting Dolphin Discovery with her family suffered bite marks, puncture wounds, deep cuts and bruising to her legs and feet after being savaged by two bottlenose dolphins.

She was saved only by clinging to the top of her bodyboard before a trainer dragged her to safety.

Bosses at the “ethical” centre blamed bad sea conditions for causing the dolphins to become “distressed”.

Dolphins make look friendly, but they are hunters who will bite down when either attacking prey or feeling threatened.

A bottlenose dolphin has between 80 to 100 teeth which they use to grip on to their prey, and they have been known to bite humans.

In fact, people have been bitten and pulled under by dolphins so frequently in the US that the National Marine Fisheries Service has released several warnings about swimming with them.

In 2013, Valerie Ryan was swimming off the coast of County Clare, Ireland, next to the Doolin Pier.

Dusty, a female dolphin known to be friendly normally, swam over and became territorial, flapping her tail.

Although Valerie tried to quickly swim away, Dusty rammed her with her snout.

Luckily, several locals were able to drag her out of the water and get her to a hospital, although she suffered a damaged lung, three broken ribs, and six spinal fractures, and needed to take five months off of work.

Dolphins can often become violent in captivity, where they are cooped up in tanks or pens up to 200,000 times smaller than their natural habitat range, and deprived from being able to eat and mate as they would in the wild.

For this reason, they can become sexually aggressive towards humans.

In February 2019, a viral video appeared to show a dolphin getting “frisky” with a tourist in Cuba.

The short clip shows the woman sitting on a pontoon when a dolphin leaps up on top of her.

As she howls with laughter, the dolphin seems to make repeated “humping” motions.

The woman captioned the video: “I was trying to touch and hug one of the dolphins and it started to get a little too friendly.”

She added that security had to come over and drag the sea mammal off her.

This isn’t the first example of its kind. In 2002, authorities at Weymouth Harbour in Dorset issued a warning to swimmers about “sexually aggressive” dolphins and noted that one male had already tried to mate with a few divers.

Dolphins have also been known to display sexually aggressive behaviour towards other animals.

In 2018, two bottlenose dolphins were pictured horrifically attacking porpoises for no apparent reason.

In 2012, a dolphin at SeaWorld, Orlando, attacked a young girl, eight-year-old Jillian Thomas, biting her arm and almost dragging her into the water.

Jillian had already fed and touched the dolphins earlier that day, but this time, she made a crucial mistake.

In her excitement, the child lifted a small plate of food for the dolphins into the air, something visitors are warned not to do.

A dolphin rose out of the water and clamped its jaws around the screaming girl’s hand, leaving her with nasty puncture wounds.

In a truly bizarre story, a woman named Margaret Howe had a “love affair” with a dolphin as part of a disturbing scientific experiment.

The 23-year-old research assistant took part in a NASA-funded study designed to teach dolphins to understand and even mimic human speech.

In the long run, the hope was to work out how humans could talk to aliens.

As part of the experiment, Margaret and Peter, a six-year-old bottlenose were put together in a purpose-built complex called “The Dolphin House”.

The sprawling site was flooded with water, which would allow the pair to live together for 10 weeks.

Margaret could only get out of the water by climbing onto a dry bed or desk suspended from the ceiling.

Dr John C Lilly, the mad scientist behind the experiment, confidently predicted that the dolphin would be able to mimic human speech “within a decade or two”.

However, in a surreal twist, Peter fell “madly in love” with Margaret, and by week four, she had noticed that he would flirt with her, by nibbling at her and rubbing against her legs, and becoming sexually aroused.

As his urges became lustier, Margaret decided to start pleasuring the dolphin in a bid to keep him focused.

She denied that it was a sexual experience for her, but acknowledged it was for him, and admitted the experience was “sensuous”, saying she formed a deep emotional bond with Peter.

After the experiment came to an end, Peter reportedly became so miserable that he lost the will to live and refused to breathe, sinking to the bottom of his tank in a case widely claimed to be an act of “suicide”.

Dr Chiara Giulia Bertulli, Sightings Officer at the Sea Watch Foundation, told The Sun in 2019 there’s a misconception about the mammals being friendly and placid.

“People forget that dolphins are wild animals and like any land or aquatic mammal they live in a complex society where there are all kinds of behaviours and personalities,” she said.

“Some can show tranquil behaviour – travelling, searching for food and socialising – but others can show much more aggressive behaviour, even within their own species. Many dolphins have tooth rakes on their skin from bouts of fighting.”

Bertulli explained that older dolphins often attack younger dolphins in order to discipline them, and mothers can be particularly aggressive when protecting their children if they feel under threat.

Marking out territory and asserting sexual dominance are also key factors in dolphin behaviour. They don’t mate at a specific time of year, but they appear to have frequent recreational sex with both males and females.

“Male dolphins, in particular, can show violence when fighting over new territories or dominance over the females,” Bertulli said.

How to get under the skin of Mexico City’s coolest neighbourhood, Roma