A MUM and her one-year-old baby were kidnapped by Russian troops and held in a crowded basement for three weeks after trying to flee the Ukraine war.

Viktoria Kovalenko hid in a parked car after her husband Petro and her daughter Veronika, 12, were killed by Russian shelling as the family tried to escape the fighting in Chernihiv in March.

But the next day, Viktoria and her baby daughter, Varvara, were kidnapped by Russian troops and marched to a school in Yahidne.

They were held in a crowded basement with another 300 civilians for more than three weeks.

Viktoria told the BBC: “It was dark, it was dusty, there was no air or windows – it was for storage, not for humans.

“It was intolerable at times. We had people aged over 80, who were really poorly and suffocating from the lack of oxygen. 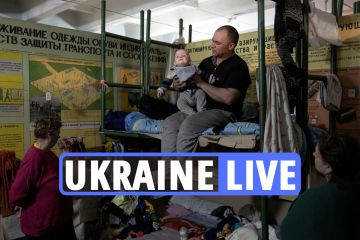 “In our room, we were writing with a piece of coal, the names and dates of people who died, so we could put it on their graves.

“Twelve people died in the basement.

“I thought of nothing, I was in shock, I tried to block all emotions. I was just speaking to people, but my whole being was concentrated on surviving.”

Most of the time people were not allowed to leave to use a toilet, and they were made to use buckets instead.

“We could see their veins, and they started to bleed, so we made bandages.”

As people died one by one in the basement, neighbours were allowed from to place the bodies in a mass grave in a nearby cemetery.

Viktoria begged the Russian troops to bring her the bodies of her husband and her daughter.

“They kept refusing… but eventually I got my request to the commander of that Russian unit,” she said.

The bodies of Petro and Veronika were brought to the school and buried in the woods.

“I was there when my loved ones were buried,” she said.

“There were about five Russian soldiers and they dug out two graves for my daughter and my husband.”

When she was finally released from the basement after the Russians retreated following fierce fighting, she fled with her baby to the safety of Lviv before heading for safety in Poland.

Viktoria is now stuck in Poland and has waited nearly 50 days for a UK visa.

She said: “I’m currently in Poland and it’s getting hard for me.

“I need to be on the move, not to remember it or revisit the events in my memories, and just not to think about it.”

Viktoria reportedly has a sponsor in the UK – but she’s stuck in limbo while waiting for her visa.

A government spokesperson told the BBC: “Together our uncapped Ukraine Family Scheme for Ukraine routes are among the fastest and biggest visa schemes in UK history.

“124,400 visas have now been issued showing the work we’ve done to speed up the process is working and improving daily.”