Mexico soccer fans banned for homophobic chant, but officials fear continued use of slurs could lead to worse

There have been public service announcements, public pleas, threats, fines, ejections and games interrupted by the warning that action would not be permitted to continue.

Those involved and in charge of world soccer generally and Mexican soccer in particular have employed just about every device available to stop fans of the Mexico men’s national team from bellowing out the offensive chant that has followed nearly every opposing goal kick for as long as two decades.

Given how little impact all of these devices have demonstrated in recent years, it gradually became clear there were only two methods that carried the necessary weight to suppress the homophobic chants that must be eliminated.

It probably has taken FIFA too long to implement this punishment, but at least when they finally reached for this lever, it appears they did not do it for some meaningless friendly. Mexico will play its first two qualifiers for the 2022 World Cup – Sept. 2 against Jamaica and Oct. 7 against Canada – behind closed doors.

The FIFA Disciplinary Committee has sanctioned the Mexican Football Association (FMF) with a fine of CHF 60,000 and an order to play its two upcoming official home matches behind closed doors following homophobic chants by Mexican fans at the Olympic Football Tournament qualifiers against Dominican Republic and the USA played in Guadalajara on 18 and 24 March 2021 respectively. — FIFA statement

By the time El Tri has played four games of the scheduled 14 in the qualifying cycle, they will not once have played before the large, boisterous crowds that have helped make facing them such an extraordinary challenge for other teams in CONCACAF.

This is what it’s come to, because it’s the only way to make it stop. There will be no homophobic chants for two games, at least, and perhaps the message will be regarded as a result.

MORE: Explaining the homophobic slur that has Mexico in hot water with FIFA

The Federacion Mexicana de Futbol knew this was coming down Thursday and arranged a news conference outside Mexico City that also was available to reporters outside the region via a virtual video conference. And the tone adopted by FMF president Yon de Luisa and head coach Tata Martino made it clear they recognize that if item No. 2 has been implemented, No. 1 could be close behind.

“I repeat that we have a lot to do. We can’t permit these sanctions to continue to add up. And today, we see the first important sanction, and it can get a lot worse.”

The possibility that fans might not be the only group kept from the stadium was an obvious concern for Martino.

“That we can’t be together in a qualifier and we could even lose out on an international competition with all the important [things] that are ahead of us,” he told reporters. “I think that the fans bring such great support, and the players feel the support of our fans and ask them to focus on the national team, our players and the support they feel when the national team fans are behind their team. 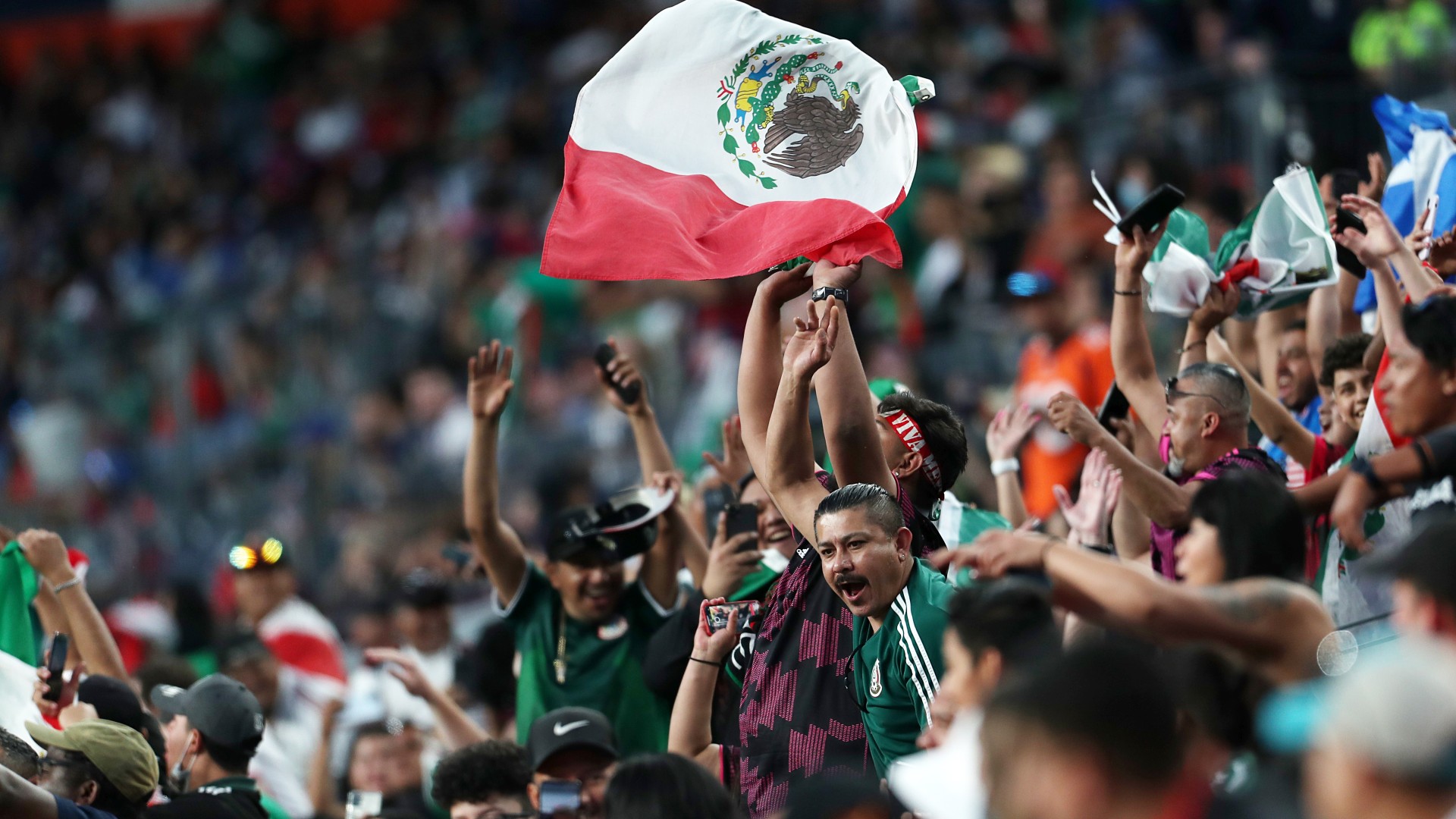 “We’re really concerned, and we’re all expressing it. We’re concerned about what’s going to come and the sanctions we could suffer and, fundamentally, because we don’t want to be away from our fans. I think that any national team that wants to do important things depends on its soccer players, its team and the support of its fans. I invite people to reflect on this and invite them to focus and exclusively support the Mexican national team.”

Prior to the CONCACAF Nations League games in Denver earlier this month, officials of the regional federation warned fans that continued use of the chant would lead to a three-step process that begins with the game being interrupted and potentially could go as far as the game being abandoned. Both of Mexico’s games, against Costa Rica in the semis and the United States in the title game, were temporarily halted after the chant was heard.

the match was stopped because homophobic chant was used. we love to see sports start to care abt discrimination and homophobia #USAvMEX pic.twitter.com/nfw6O13IlI

FIFA”s disciplinary committee, though, actually was reacting to Olympic qualifiers, against the Dominican Republic and the U.S., contested in Guadalajara in March. The committee also is looking into a similar episode that occurred in May, when Mexico held a friendly against Iceland at AT&T Stadium in Arlington, Tex. FIFA has not made it clear to the Federation what approach it might take to the issues in the CONCACAF Nations League games. It’s possible, de Luisa said, that even Liga MX and its clubs could be impacted by this issue.

FMF presented a series of public service videos, two of them featuring members of El Tri, to express their commitment to removing this slur from the atmosphere surrounding the national team’s matches.

“Ninety minutes of soccer. Ninety minutes supporting our team. That’s why we show up at a stadium,” the narration on one video said. “The discriminatory chant is in the past because it’s no longer part of our values as a nation. Our identity is our national team. Let’s stop chanting that one word, so we can chant many more.”

This has been an issue for FMF for a long time, although some in past administrations attempted to dismiss the chant as being an issue of translation, and not intended as a slur.

And so there were threats of penalties at the 2014 World Cup, as reported by the London newspaper The Telegraph. The federation was fined five times by FIFA in 2016.

In office at the head of the Mexican federation since 2018, de Luisa said he has worked “from Day 1” to eradicate “any discriminatory act.” The videos presented Friday were not the first; de Luisa pointed out a public campaign in advance of Mexico’s friendly last week against Honduras in Atlanta worked well enough that a crowd of 70,000 (photo below) did not contribute to this controversy. 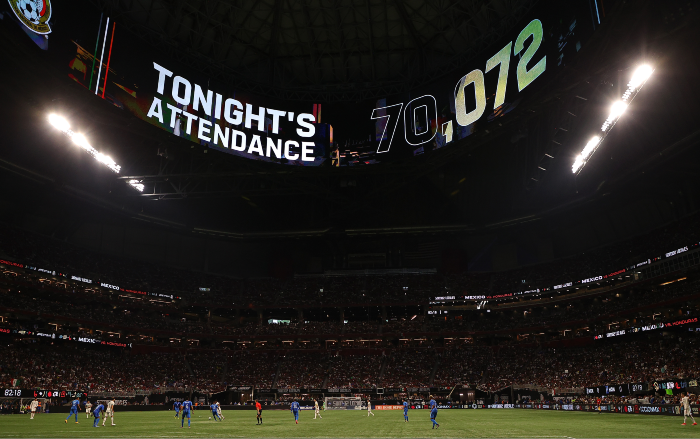 FMF seemed less than eager to concede that the “official matches” mentioned in the FIFA sanction referred to the home World Cup qualifiers for the senior men’s team, and de Luisa said the federation would follow up with FIFA. It’ll be shocking if they get any other answer.

It’s obvious the Mexican federation knows this, regardless. Because the concern apparent in their discourse Friday, and their own words throughout, was for El Tri.

“We have to think that we’re going to be able to change this. I think we’ve achieved a lot in the last two years and with the help of the media, CONCACAF and the clubs and a large part of the fans who have understood that committing these discriminatory acts doesn’t get us anywhere good,” de Luisa said. “And just in recent days, in a stadium like Atlanta’s with 70,000 fans, there were no chants. This is a great example of what we can do.

“So I think the path we’ve taken is very important. We just have to close the final detail. These last persons who are still not convinced that the chant is discriminatory, and in their head they think that it’s fun, we all have to convince them that it is not, and on this day today, it has affected us. The campaigns will continue. And I repeat: I don’t think they have failed. They haven’t finished bringing about all the effects we’re looking for. And this fills us with profound sadness and clearly profound concern … So we can’t give up on the path.

Failure is not an option. Because everyone inside the El Tri family recognizes what the consequences might be. Perhaps those who so love this team will come to understand.

The Cucapá in Mexico fight against climate change and oblivion