Mexico reported essentially flat growth in natural gas and oil production in 2021 as gas imports from the United States continued to surge. 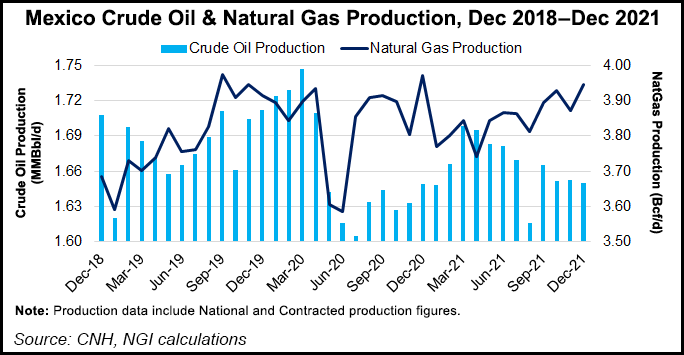 Imports account for 90% of gas consumed in Mexico when excluding gas consumed by Pemex as of October 2021, according to CNH. Including Pemex consumption, the figure is 72%.

As a result, most gas bought and sold in Mexico is priced off U.S. locations such as Henry Hub, Waha and Houston Ship Channel, plus the cost of transport.

Natural gas prices in Mexico averaged $4.721/MMBtu in December 2021, up from $3.636 in December 2020, according to the latest IPGN monthly price index compiled by the Comisión Reguladora de Energía (CRE). CRE used 355 transactions reported by 31 marketers to calculate the latest index.

Pipeline gas exports from the United States to Mexico rose by 14% year/year during the January-August period of 2021, according to the International Energy Agency (IEA). Cross-border pipeline flows stood at 5.556 Bcf/d as of Wednesday, according to NGI Data.

IEA said in July it expects Mexico natural gas imports from the United States to grow by an estimated 10% over the 2020-2024 period.

TC Energy Corp., whose pipelines move about one-fourth of the gas consumed in the country, sees Mexico’s total gas demand rising to 12 Bcf/d by the end of the decade from about 8 Bcf/d currently, driven primarily by the power sector.

The latest figures follow a visit by U.S. energy secretary Jennifer Granholm to Mexico, after which she expressed “real concerns” on the part of the Biden administration about a proposed regulatory overhaul in Mexico’s energy sector that would favor state power utility Comisión Federal de Electricidad (CFE) over private sector competitors in the power sector.

The proposed legislation aims to roll back prior reforms that opened Mexico’s hydrocarbons and electricity markets to private competition, and would consolidate CFE’s control over the entire electric power value chain, according to Fitch Ratings Inc. analysts.

“We must maintain and enhance open and competitive energy markets that bring benefit to North America,” Granholm continued. “I was assured that Mexico is committed to supporting clean energy and resolving current disputes with energy projects within the rule of law.”

“Unfortunately, Mexico continues to undermine this agreement with discriminatory policies that favor state-run energy companies while hindering private investment and putting U.S. companies and workers at a disadvantage.”

Although López Obrador has respected the validity of exploration and production contracts awarded under the previous regime, U.S. companies operating in Mexico have alleged unfair treatment by Mexico regulators, particularly with regard to permits for importing and marketing liquid fuels.

COVID-19 cases in the Americas reach highest level yet |

WHO: New guidance on treating complications due to unsafe abortion |

WHO: New guidance on treating complications due to unsafe abortion |