With investors like Lightspeed and The Chainsmokers, Mexican neobroker Flink raises $57M to boost financial inclusion in LatAm – TechCrunch

Flink, a Mexico City-based neobroker, has raised $57 million in a Series B round of funding led by Lightspeed Venture Partners.

The financing comes just over six months after Flink raised $12 million in a Series A round led by Accel. Existing backers Accel, ALLVP, Clocktower and new investor Mantis Venture Capital (founded by The Chainsmokers) also put money in the Series B. Since its 2017 inception, the startup has raised nearly $70 million.

Neobrokers are defined as startups that are disrupting the investment industry by providing a platform for a wider range of consumers to partake in the stock market by offering them more incremental investment options and modern and easy mobile-based interfaces to manage their money. There is a growing number of them globally, including Scalable Capital, Bitpanda and Trade Republic in Europe.

For Mexico City-born Sergio Jiménez Amozurrutia, the fact that in his country of more than 120 million people, only a tiny fraction of the population has the ability to invest in the capital markets felt unfair. To him, the lack of widespread participation in investing is an example of the rich getting richer as part of an infrastructure “that is built for the wealthy.” The result of the imbalance is that a lot of people have historically been locked out of making potentially wealth-building investments.

So after selling Easy Credit, a consumer lending platform he’d built with Rick Rafael Bueno (whom he met in 2015 at a hackathon at Tech de Monterrey), Amozurrutia set out to give Mexicans access to something he believed they’d never had access to: an app-based consumer trading platform.

Flink launched its app in 2018 with a wallet service, a digital and physical global debit card backed by Mastercard and, last year, it began offering the ability to buy and sell fractional shares from 30 pesos, without commissions, for NYSE-listed stocks.

“Users can invest as little as US$1 and with zero commissions,” Amozurrutia said. “We want Flink to be the easiest way to invest, save and use your money.” 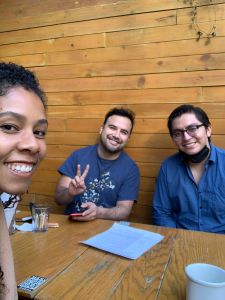 The demand for what the startup has to offer is clearly there. Since launching its first brokerage product in July of 2020, Flink has 1.6 million users, up from 1 million users at the time of its February raise. Over 85% of its users are first-time investors. GenZers seem to be the most interested in investing — 27% of the app’s clients are between 18 and 25 years old, while 22% are millennials, execs say.

“Most legacy Mexican banks cater to less than 1% of the population — meaning most Mexicans don’t have a bank account, let alone a brokerage account,” Amozurrutia said at the time of the company’s last raise. “At Flink, we’re guided by the belief that Mexico’s financial system should work for everyone — not only a select few.”

The company is growing its user base by 38% per month and revenue by 31% per month, according to  Amozurrutia, and touts a user acquisition cost of 62 cents. It is currently the largest retail brokerage service in Mexico, he said. Flink has 110 employees, up from 25 people a year ago today.

The startup plans to use its new capital to keep growing its team, toward product development and to expand its service to different countries in Latin America.

“The lack of access for retail investing is all over LATAM, and at Flink we want to change that,” Amozurrutia told TechCrunch. “We are focused on offering the opportunity to invest and grow their money to everyone in LATAM.”

Lightspeed Partner Mercedes Bent said her firm “fell in love” with Flink’s mission and impact on the country’s “financial ecosystem.” It was also impressed by the company’s unique features, including allowing Mexican investors to access the U.S. stock market and invest fractional shares.

“Many equities platforms only let you invest in equities in your own country,” she said. “Flink also has a big focus on education and creating an investment experience that makes it easy for their users to onboard.” For example, Bent noted, Flink has a podcast dubbed “Finanzas en órbita” that provides financial and stock market education in México.

In a blog post, Bent and Will Kohler wrote that they could feel the company’s passion and vision for creating more financial inclusion in Mexico, even via a Zoom call.

“The excitement leapt through the video screen,” the pair wrote. “…Flink’s vision for the future goes beyond accessing stocks, and we wanted to be a part of it.”

Flink marks Lightspeed’s third investment in Mexico, alongside Stori and Frubana, and Bent and Kohler say there is “more to come.”

“We are big believers in México, and bullish on LATAM,” they wrote.

Grace makes landfall as a category 3 hurricane in Mexico

It was more than 20 years ago that Jose Cuervo, now the best-selling brand of tequila in the world, made a decision to commit toward creating a better...

HERMOSILLO, Sonora, Mexico (July 23, 2022) – Last night’s “Canela Fight Night” series inaugural event was a knockout success, in addition to being a platform to showcase a...

In the coming years, upstream capex in Latin America will shift into deeper and deeper water with Brazil, Guyana, and Mexico likely to lead the charge for new...

FC Barcelona player Dani Alves visits the Sydney Opera House with fellow members of the squad during their trip to Australia for a friendly soccer match against the...