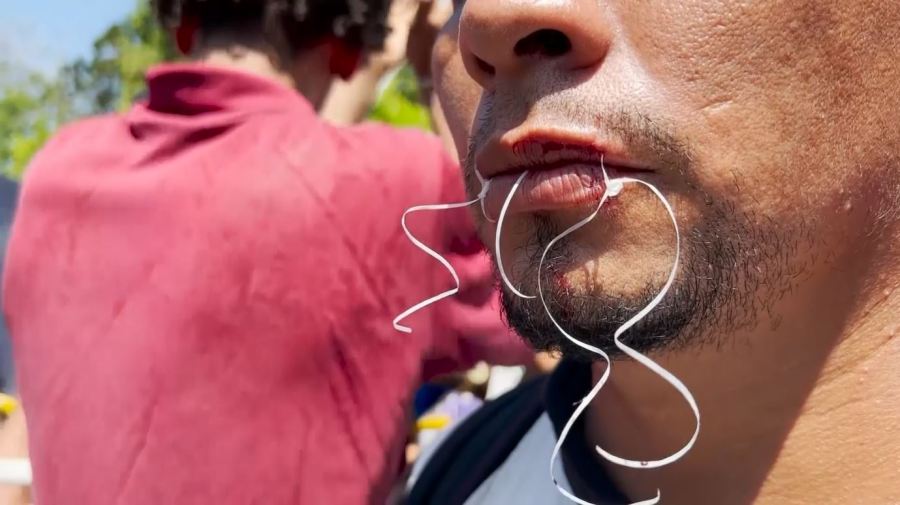 A group of migrants gathered with their mouths sewed shut in front of the offices of the National Migration Institute in the border city of Tapachula, Chiapas, on Tuesday, in a demonstration demanding documents from the Mexican authorities allowing them to cross to the North and the United States.

Every day, hundreds of migrants gather in front of the National Institute of Migration in the southern town of Tapachula in the hopes of getting papers that would allow them to leave town and continue their journey north.

Last year, the Mexican government launched a new plan to relocate migrants to other states across Mexico and give them humanitarian visas so they can work legally for a year.

Authorities granted free passes, working visas, and even provided buses to transfer migrants to other states in the country to decongest the southern border but, a backlog of requests for visas and the fact that many of the migrants still aspire to make it to the United States is casting doubt in the success of the plan.

Some migrants have been waiting for months in the sweltering city of some 350,000 where they have crowded shelters, parks and plazas.

Without a permit to work, their money is rapidly running out.

Wilbert Cardenal, a migrant from Nicaragua, said he was protesting so that authorities “don’t force us to stay here” and so “they grant us humanitarian or visitor visas so that we can keep going”.

“I am tired, and that is why I am sewing shut my mouth,” said a Haitian migrant, before having his mouth sewn to cheers from the surrounding crowds.

The sewing of their mouths is just the latest and most extreme form of protest undertaken by the migrants. Late last month some had also declared a hunger strike.

10 migrants sew their lips closed in protest against Immigration

10 migrants sew their lips closed in protest against Immigration