North America natural gas futures continued to be unpredictable this week as cold weather descended across the Lower 48, while demand for U.S. gas in Europe and Mexico continued to rise. 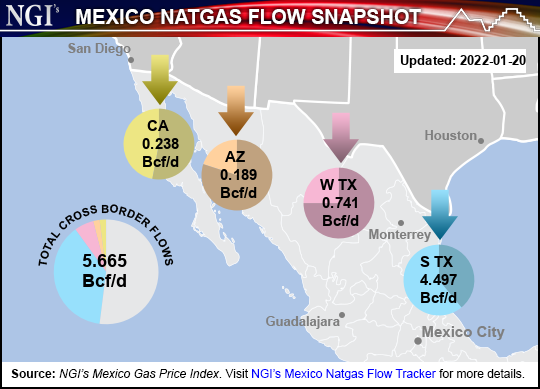 Upcoming bursts of Arctic air were expected to make January the coldest since 2014 in the United States and U.S. production is down from December. Even still, futures prices had not found momentum this week.

“The natural gas market is volatile and it looks like that volatility is here to stay,” said Santa Fe Gas LLC CEO Santiago Garcia. He spoke Thursday at Industry Exchange LLC’s 7th Mexico Infrastructure Projects Forum in Monterrey, Nuevo León. “We got accustomed to stability in prices, but that’s gone now.”

NatGasWeather noted on Wednesday that freezing temperatures were expected later this month in the United States and Europe, which would further bolster liquefied natural gas (LNG) demand. “Both the domestic and European models still forecast the coldest/best 15-day pattern so far this winter season as lows of minus 20s to 20s impact much of the northern two-thirds of the U.S., including anticipated freeze-offs of several Bcf/day to production,” the firm said.

U.S. LNG exports are reaching historic highs this month. Meanwhile, Mexico imports of U.S. natural gas had a record year last year and are up in January.

Mexico imported 5.65 Bcf of natural gas via pipeline from the United States on Thursday (Jan. 20), and 5.63 Bcf/d over the past 10 days, according to NGI data.

Deliveries into Mexico from West Texas dipped to 741 MMcf/d, compared to 802 MMcf/d last Thursday (Jan. 13). Kinder Morgan Inc. said Wednesday in a notice to customers the expected weather could cause freeze-offs and limit flows of gas on its El Paso Natural Gas Pipeline. This could result in supply shortfalls and power outages in parts of Texas.

“For the Mexico market, I like the current price,” said Garcia. “It’s a price that lets buyers compete. Just look at how the international market is paying $30/MMBtu… and it also helps spur production which creates stability in markets.”

Santa Fe was the first marketer to gain rights to market natural gas in Mexico after the country’s landmark 2013-2014 energy reform.

Natural gas spot prices at Henry Hub averaged $3.91/MMBtu for 2021, the U.S. Energy Information Administration (EIA) said in its latest Short-Term Energy Outlook. This year and next should bring slightly lower pricing for the national benchmark, with a forecast average price of $3.79 for 2022 and $3.63 for 2023, the agency said.

This week, Mexico President Andrés Manuel López Obrador said the government was looking to partner with private firms to develop the natural-gas rich Lakach deepwater field. During the Monterrey event, officials from Comision Federal de Electricidad touted a series of planned tenders for pipeline infrastructure that should increase connectivity and foster increased demand.

Mexico’s Sistrangas five-day line pack average was 6.549 Bcf on Wednesday (Jan. 19), below the optimal line pack of 6.86-7.29 Bcf needed to guarantee sufficient pressure in the system. System operator Cenagas has advised users to maintain injections and withdrawals to their contractual quantities or risk facing penalties.

Demand on the Sistrangas on Wednesday was 4.639 Bcf, down from 4.652 Bcf a day earlier. Mexico gas production fed into the system was 1.259, down from 1.307 Bcf a week earlier. Southeast production dominated the total, with 695 MMcf/d from the region injected into the pipeline system.

On Thursday, the EIA reported a 206 Bcf withdrawal from natural gas storage inventories for the week ending Jan. 14. The print was higher than the expectations of analysts.

The South Central region posted a withdrawal of 69 Bcf, leading all regions. This included a 48 Bcf pull from nonsalt facilities and a 22 Bcf pull from salts, according to EIA. Until Mexico develops its storage capability, this is the storage system most readily available to the country.

As outsiders eye their lands, the Lacandones face an uncertain future