U.S. natural gas futures prices key to the Mexico market soared this week on the back of colder forecasts and rising geopolitical tension in Europe. 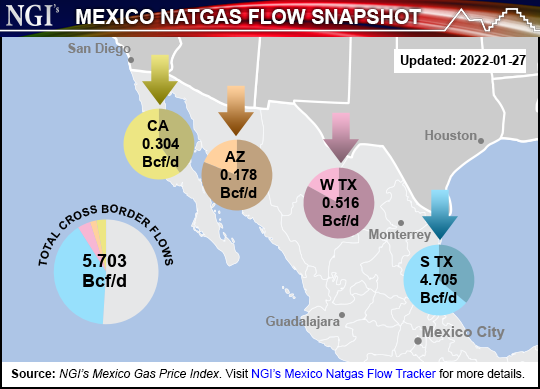 On Thursday, the expiring February New York Mercantile Exchange gas futures contract went out with a bang. It surged briefly above $7.00/MMBtu before settling at $6.265, up almost $2.00 on the day. March gained 24.7 cents to $4.283.

“What a wild expiration” for February contracts “along with wild weather trends,” NatGasWeather said Thursday afternoon. “Tonight’s weather trends will again be closely watched by the natural gas markets as they prepare for the weekend break and where it will certainly be a dangerous weekend to hold.”

EBW Analytics Group noted earlier in the week that the expiring front-month gas contract has shown a tendency to rise into options expiration and final settlement. The group added that there could be an element of panic buying in the market given what occurred with Winter Storm Uri last February.

January has also been a month of frigid temperatures in the United States, and weather models for February this week kept trending colder. There was also growing concern for the potential that Europe may need additional liquified natural gas (LNG) supplies amid rising Russia-Ukraine tensions.

On Thursday, U.S. feed gas nominations at LNG export facilities were once again near record levels at 13.07 Bcf.

White House press secretary Jen Psaki said the Biden administration is working with European allies to ensure adequate natural gas supply in the event Russia cuts off access. Natural gas markets “are very regional by nature,” she said, “given constraints on how much can be exported. So, any reduction in Russian exports of natural gas to Europe would have a minimal impact on U.S. prices.  That’s what our anticipation would be.”

Goldman Sachs Commodities Research said in a note Thursday “risks remain that an escalation of Russia-Ukraine tensions” could result in sanctions on the Nord Stream 2 pipeline, “which would potentially end up curtailing flows to Europe for an indefinite period. This would, in our view, exacerbate the tightness in European gas markets that we expect through 2025.” The pipeline is designed to move gas from Russia to Western Europe.

Mexico imports of U.S. natural gas, meanwhile, continued to be on the upswing after the holidays. Imports on Thursday of piped gas from the United States were 5.68 Bcf, with a 10-day average of 5.53 Bcf/d, according to NGI calculations.

Through Jan. 21, Mexico dry gas production was also up at around 2.7 Bcf/d. This figure is almost 16% higher than in December and the biggest month/month jump in seven years, according to Wood Mackenzie estimates.

In Mexico, NGI natural gas spot prices rose in the Northeast on Wednesday, with Los Ramones up 24 cents to $4.662. Monterrey via the Mier-Monterrey system was up 23.8 cents to $4.467.

Mexico’s Sistrangas five-day line pack average was 6.617 Bcf on Wednesday (Jan. 26), below the optimal line pack of 6.86-7.29 Bcf needed to guarantee sufficient pressure in the system. System operator Cenagas has advised users to maintain injections and withdrawals to their contractual quantities or risk facing penalties.

Demand on the Sistrangas on Wednesday was 4.596 Bcf, down from 4.614 Bcf a day earlier. Mexico gas production fed into the system was 1.283, up from 1.259 Bcf a week earlier. Southeast production dominated the total, with 719 MMcf/d from the region injected into the pipeline system.

On Thursday, the U.S. Energy Information Administration (EIA) reported a withdrawal of 219 Bcf natural gas from storage for the week ended Jan. 21. The print was the biggest so far this winter and higher than the expectations of analysts.

The South Central region posted a withdrawal of 81 Bcf, leading all regions. This included a 53 Bcf pull from nonsalt facilities and a 29 Bcf pull from salts, according to EIA. Until Mexico develops storage capability, this is the storage system most readily available to the country.